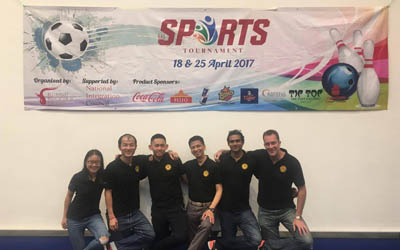 Last week, The Restaurant Association of Singapore (RAS) hosted their annual Futsal tournament where SDH Institute won the Bronze medal! On the 25th of April, we participated in their inaugural bowling tournament where 29 teams competed for the trophy. The event was very well organized where each team consisted of 5 players and they played 2 games of 10 frames. The winner was calculated by their total score after the 2 games. Although the SDH Bowling Team played brilliantly and gave it their all, we did not manage to place as our opponents gave us some fierce competition, big props to Select Group who won the overall tournament! This event was a great reminder that sports is more than just about winning, especially when you have a team involved. We were one of the loudest teams cheering with the biggest smile on our faces; we supported our team members even if they did not hit a strike. Being a good sportsperson is about having that positive mentality and cooperating as a team, it was great to have the student and staff to mingle out of a classroom setting. Until next year, we shall be back!