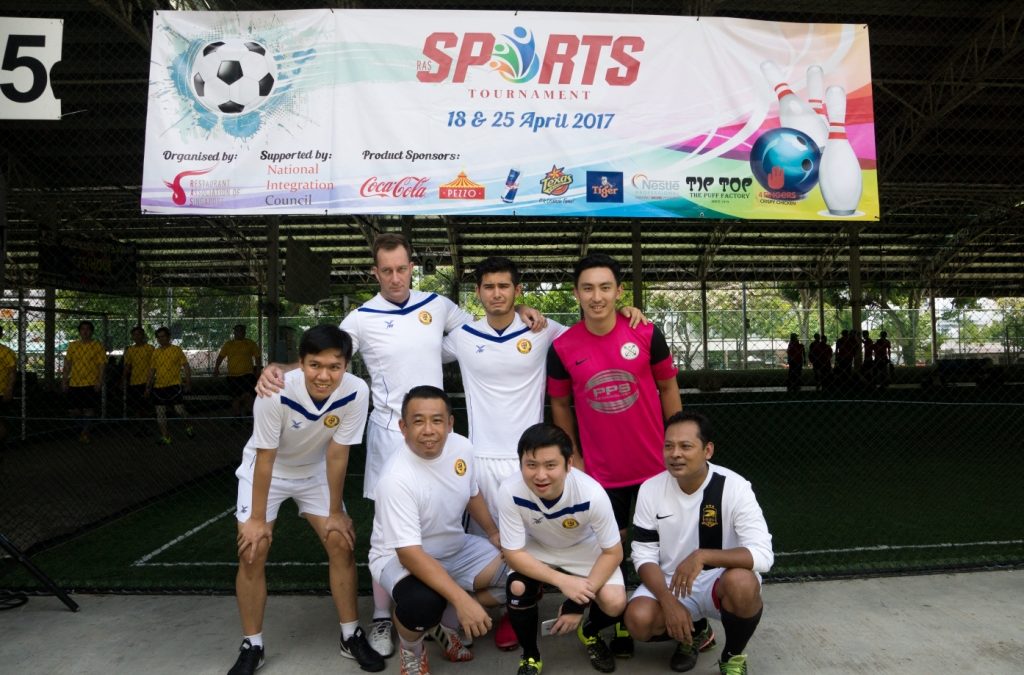 The Restaurant Association of Singapore (RAS) was founded in 1980 and acts as a collective voice for the F&B industry. Currently, they have 350 members, representing about 600 brands that operate close to 3,000 outlets. Last year, they organized an inaugural Futsal tournament for its members in which SDH Institute won 1st place and were champions. Therefore, we had even more determination to regain our title when we were invited to participate this year.
32 teams played in the RAS Futsal Tournament where we were randomly split into 4 groups of 6-8 teams. SDH Institute excelled during the group stages by winning all their games (2-0, 1-0, 3-0, 5-0 & 2-0) and placing top of their group; the others did not stand a chance! A big round of applause to the boys who played 3 games back to back with barely any break, they worked extremely hard. This got us through to the quarter finals where the tournament became a knockout round. We were up against 1-altitude, Team 2, who were reasonably strong. The 7-minute game ended in a 1-1 draw which led to a nerve-wrecking and exciting round of penalties; our supporters were so anxious but also screaming cheers. SDH Institute won by scoring 3/3 penalties whereas 1-altitude, Team 2, only got 2/3, we had a great celebration. However, in the semi-finals, we fought hard but lost 0-1 in a very close game to 1-Altitude, Team 1. Although disappointed that they could not be the champions like last year, the boys managed to recuperate and secured a Bronze medal in a deciding match against Select Group!
Well done to all the players who played extremely well, especially to the ones who got injured fighting for the medal. RAS is also organizing an inaugural bowling tournament on Tuesday, the 25th of April where SDH Institute will be competing and demonstrating the best form of teamwork. It is held at JFORTE Sportainment Centre from 1pm=6pm, come down and show your support!